The History of ADHD

Special Strong > The History of ADHD 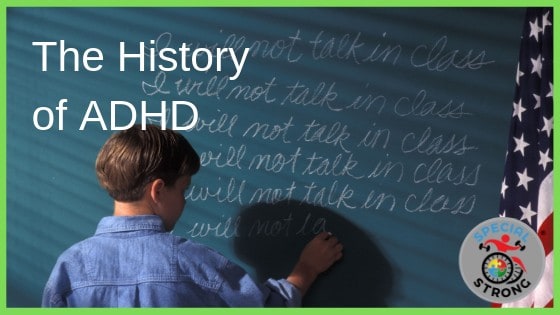 If your child’s teachers suggest that your child might have ADHD, your first reaction was probably one of alarm. A million thoughts start running around your mind along with even more questions. You wonder if your child is going to need to take medications. What exactly is the history of ADHD?” After all, aren’t all children fully of energy and tend to not pay attention?

The simple fact is, ADHD is a very real diagnosis, one that many must live with every day of their lives. However, it is not one anyone should attach to every overactive or over-imaginative child. Don’t rush your child to the doctor worried that your child may have ADHD quite yet. Before you go that far, let’s take a look at the history of ADHD. This will help you have a better understanding of the disorder. Then you might see why teachers, mentors, and even doctors – might be trigger happy providing that diagnosis.

The content is not intended to be a substitute for professional medical advice, diagnosis or treatment. Always seek the advice of your physician or other qualified health providers with any questions you may have regarding a medical condition.

The Medicine Preceded the Diagnosis

Although doctors mentioned an “abnormal defect in the moral control of children” in the early 1900s (NOT the language or understanding of the diagnosis today). The invention of Benzedrine accelerated the discovery of the condition. The original intention that led to the development of a drug that people would use as an attention-correcting treatment.

The original 1933 advertisement for Benzedrine claimed it made an excellent decongestion. However, it didn’t take long for people to recognize its stimulant effects. Not only did it increase a person’s energy, but it also gave people motivation to complete mundane tasks.

It wasn’t until 1937 that the first studies began to use this drug on children with demonstrated neurological and behavioral issues. The government gave it to troops in WWII to help them stay awake when out on patrol or in combat. Vietnam era troops are only too familiar with the little red “Bennies” Uncle Sam provided for the same reason. 1960s moms used “mother’s little helpers” and truckers have used them for decades.

The Diagnosis Was Not Recognized in the First DSM

In the 19th century kids with ADHD were described by Sir George Frederick Still were said to “have a defect of moral control.” In the first decade of the 20th century, Alfred E. Tredgold had this to say. Children who probably had a mild form of brain damage resulting in ADHD he said were, “high-grade and feeble-minded.”

The DSM, or the Diagnostic Statistical Manual of Mental Disorders, did not recognize ADD or ADHD as a diagnosis. This was the first edition of the DSM in 1952. The history of ADHD began to change in 1968 as the National Institute of Mental Health (NIMH) gave out study grants. In this edition, the condition is known as hyperkinetic reaction of childhood or adolescence. It was also known as organic brain symptom

When the third edition of the DSM came out in 1980, ADD with and without hyperactivity and ADD residual type were on the list. Later, as Ritalin became the most popular treatment for, essentially, improved behavior in teenagers in school, ADD/ADHD became more and more recognized.

The Focus Shifted to Attention Span in the Late ‘90s

Attention Deficit Disorder finally received its name in in the 1980 edition of the DSM (III). Before then, doctors and researchers called ADHD:

As research continued, scientists named “attention problems” as the main issue with this disorder. In 1987 this disorder became known as attention deficit hyperactivity disorder or ADHD with several variations.

The increase in the number of cases of ADHD during the 1990s may be due to:

Why People Are So Quick to Say “ADHD” Today

While the history of ADHD got off to a rocky start, medication for ADHD is readily available, popular and well-advertised. ADD and ADHD is more widely known and discussed, which is why, whenever a child is “disruptive” in class or has a difficult time focusing on the task at hand, people are quick to suggest that the child may have ADD/ADHD.

Before you allow yourself and your child to fall victim to “being bullied” into putting your child on medication, STOP! Take your child in to see their doctor and discuss their symptoms and see what he suggests. You might also try to some holistic approaches to ADHD (and for a healthy lifestyle in general) before or while considering medication. Many of them are known to offer at least some relief of the symptom of ADHD.

Hope for People with ADHD

Those who truly have a diagnosis of Attention Deficit Disorder have options for treatment. While some ADHD medications may be right for you, there are plenty of holistic approaches to try. You can either try these as a substitute for medication, or you can use them as companion treatments for your medication:

Our founder, Daniel, has ADHD himself and saw the benefits of exercise on his symptoms. Since opening Special Strong, he has seen how exercise has improved the lives of others. If you’re ready to improve your life and lessen the impact of ADHD, consider signing up for private training sessions with our personal trainers.